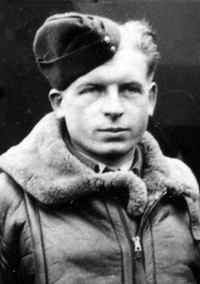 Tadeusz Piotr Żabicki was born on 16th May, 1920, in the small village of Kolonia Wilanów near Jędrzejów, in the province of Kielce. His parents were Stanisław and Małgorzata, nee Szymańska. After completing 7 years of Primary School in Jedrzejow, and 2 years of Secondary School in the same town, he volunteered to join the armed forces, like many young boys of his age, dreaming of becoming a pilot. Having passed all the necessary medical tests, he was eventually accepted on 19th August, 1938 into the group of pilot trainees at the Polish Air Force N.C.O.s Training School in Świecie. In June of the following year together with his entire group he was transferred to Krosno, where he completed the glider pilot course and began elementary pilot training in the nearby airbase at Moderówka.

But the outbreak of the war was to interrupt this intensive training. After the Russian Army invaded Polish territory on 17th September, 1939, he was evacuated to Romania, along with the other pilot trainees and instructors. Then, with the help of Polish government agencies that were still operational, they crossed the Mediterranean on a passenger ships "Patris" and "Franconia" for France, and after two weeks at sea finally reached Marseille.

The next day he reported to the centre for Polish airmen at Lyon-Bron where, together with many other evacuated Polish airmen, he waited for an assignment, hoping to continue his training as a pilot. But this did not happen quickly. It took four months before Żabicki was sent to Great Britain in a transfer of Polish airmen, which was to be the basis for the first two Polish bomber squadrons planned for the UK.

On 16th March, 1940 he took the oath at the Polish Air Force Centre at Eastchurch, was registered on the official list of Polish Air Force personnel, and received his service number 781302. Soon he commenced his initial training at the Air Crew Training Centre in Blackpool, after which on 1st July 1940 he was transferred to 18 Operational Training Unit at Bramcote, where he had the opportunity to continue his training. On 5th April 1941 Żabicki began a flying course at the No 15 Elementary Flying Training School at Carlisle, which he eventually completed at the No 3 Flying Training School at South Cerney. On 6th August, 1941 he received his long-awaited pilot's badge and was promoted to the British rank of Sergeant.

Two weeks later Żabicki was transferred once more to 18 OTU Bramcote, where he underwent his final operational training. Once completed, he and his crew were posted to 300 Polish Sqdn stationed at Hemswell on 8th October, 1942. The squadron was commanded by W/Cdr Stanisław Cwynar. Żabicki's crew consisted of: observer - F/O Józef Gryglewicz, wireless-operator - Sgt Bolesław Cywiński and two air gunners - Sgt Tadeusz Garczynski and Sgt Marian Roman.

After completing a short period of operational training with 300 Sqdn, on 1st November 1941 he was promoted to the polish rank of starszy szeregowiec (Lance Corporal), and a fortnight later, on 15th November, Tadeusz Żabicki commenced his tour of duty. His first target was the docks area in the port of Boulogne. The operation was not too successful for the young, inexperienced crew. Returning to base they became disorientated and were compelled to carry out a forced landing on a small Fighter Command aerodrome at Martlesham Heath, during which their Wellington aircraft was slightly damaged. Fortunately none of the crew sustained injuries.

As one of the "fresher" crews in the squadron, at the start of their tour they were assigned nearer, less well-defended targets in Northern France: Cherbourg, Calais and Brest. At this time, their No 1 pilot was the experienced P/O Stanisław Boczkowski, who had joined 300 Sqdn six months earlier and until then had completed 20 sorties. The experience they gained under his command allowed them soon to join the crews capable of undertaking the more dangerous and difficult tasks - bombing operations over the most heavily defended German cities. By the end of 1941 Żabicki and his crew had bombed Cologne on 23rd December and Düsseldorf four days later.

In January 1942 Żabicki flew on Münster and Hannover (the latter mission was not completed, because gyro failure forced him to return to base, bombing Ostend as a last resort target). Then he twice bombed the port of Brest, where two German battleships Scharnhorst and Gneisenau were moored. These ships were a constant target for the RAF as they were considered to pose a great danger to allied convoys in the Atlantic. The following month Żabicki carried out successful bombing missions on Wilhelmshaven, Kiel and Emden. Bremen had been the assigned target for this last mission but a drop in oil pressure forced the Wellington to be turned back early. Fortunately they managed to bomb Emden instead of their initial target. After this operation Tadeusz Żabicki was given command of his own crew as No 1 pilot.

In March 1942, the newly appointed Commander in Chief of RAF Bomber Command, Air Marshal Arthur Harris, began a new phase of allied bombing against Germany, sending an ever increasing volume of bombers to German industrial centres, bringing with it a period of intense operational effort for Żabicki and his crew. Undoubtedly the experience he had gained so far helped him to successfully complete the missions, returning home safely from raids on heavily-defended German cities, often obscured by industrial haze. In March, all of his four sorties were targeted on Essen, the heart of Ruhr Valley and the site of the Krupp Works, which produced steel for German tanks and U-boats. On 4th March, Żabicki was awarded the Field Flying Badge (no 973) and the Polish Cross of Valor, and Bar two weeks later, upon completion of 13 sorties during the month.

In April 1942, in the course of the seven operations, Żabicki bombed Cologne, Hamburg (twice), Essen (twice), Dortmund and Rostock. Within one week he completed four sorties (the same number as in the whole of the previous month). During one operation over Dortmund on 14th/15th April, despite a malfunction in the oxygen system making high altitude flying very difficult and exhausting, he pressed on, eventually dropping bombs on the target, returning home safely. A week later, on 21st April, he received the Second Bar to the Polish Cross of Valor.

Between 25th April and 1st May, he completed the blind flying course at RAF Mildenhall. After the previous busy month, Żabicki flew only one sortie in May, so having time to recover during a break from flying. However this single operation on 30th/31st May was a truly remarkable one. He bombed Cologne in an armada of 1047 bombers, the biggest Bomber Command bombing effort for a single target so far, code-named operation "Millenium".

June 1942 turned out to be the most arduous month yet for Żabicki. He completed 11 operations, during which he flew over Essen (three times), Emden (four times) and Bremen (twice). Twice he also took part in an operation which was new to the Polish airmen: dropping mines in designated areas code-named "gardening" operations due to resemblance to planting flowers in the garden. So he "planted" his mines in the approaches to ports and sea communication routes near the Frisian Islands. At the end of this month, on the 28th June, he flew a sortie in search of crews that had gone missing during the raid on Bremen the night before, unfortunately to no avail. A few days earlier, on 15th June in recognition of his bravery in combat, he was promoted to Corporal and on 22nd June, Tadeusz Żabicki was awarded the highest Polish award for gallantry: The Silver Cross of Virtuti Military, no 9462.

His last operation with 300 Sqdn was on 2nd/3rd July 1942, when he bombed Bremen. A fortnight later, after completion of his tour of duty, Żabicki was posted to 18 Operational Training Unit at Bramcote for pilot-instructor duties. It should be emphasized that the number of operations he had flown was remarkable - 38. Moreover, all of them were successfully completed. Even in three cases where aircraft failures justified abandoning the mission, he preferred to press on and complete the operation by dropping his bomb load on secondary targets.

During his service at Bramcote, Żabicki was responsible for the training of young pilots and future crew Captains, giving them the benefit of his operational experience. On 1st September he was promoted to Flight Sergeant and on 7th September he received the Third Bar to the Polish Cross of Valor. At the end of 1942, he volunteered to begin his second tour of duty. As a very experienced and highly valued pilot, his request was accepted, and on 21st January 1943 Żabicki was posted to the British 138 (Special Duties) Squadron based in Tempsford. The main duties of this unit, using the heavy four-engined Handley Page Halifax aircraft, included droppings supplies and agents for the underground organisations throughout German-occupied Europe.

Żabicki joined "C" Flight, formed from Polish crews assigned this unit. With Sgt Karol Twardawa as Captain and 1st Pilot, his first operation with the new crew took place on 13th/14th February 1943. The mission, to drop agents in Czechoslovakia, was not successful as unfavourable weather conditions resulted in them being unable to locate the drop zone. During February Żabicki dropped agents over Germany and twice over Poland. On 1st March he was promoted to the Polish rank of plutonowy. About 12 days later Żabicki flew to France with supplies and agents. Between 13th and 20th March, he flew to Poland three times (two operations were successful, however the last one was not completed due to failure to locate the drop zone). Three days later he again flew to France and on the next night to Poland, with supplies for the Polish Underground Home Army.

After a short rest, in April Żabicki and his crew completed four drops over France and just one in May over the Netherlands. Having gained more experience. he became the 1st pilot and the Captain of his crew. In June 1943 they flew seven dropping operations over France and Belgium only one of which, on 15th/16th of June, had to be abandoned.

After completing 58 operations, Żabicki's luck unfortunately ran out. During his 59th sortie on 23rd/24th June, in an attempt to deliver agents and supplies to the Netherlands, his Halifax BB379 NF-J was seriously damaged by flak and German night fighter. Eventually the crippled, burning aircraft crash-landed near Amsterdam at about 5.15 am. In the wreckage pilot F/Sgt Tadeusz Żabicki, 2nd pilot F/Sgt Walenty Siciński, navigator F/O Wacław Kalkus and wireless-operator F/Sgt Kazimierz Kidziak perished. Only flight engineer Sgt Stanisław Roehr, rear air gunner F/Sgt Józef Rek and dispatcher Sgt Edward Kasperowicz managed to bail out, only soon to be taken prisoner by German soldiers.

Sgt Pilot Tadeusz Żabicki is buried in the New Eastern Cemetery at Amsterdam in collective grave no 62.