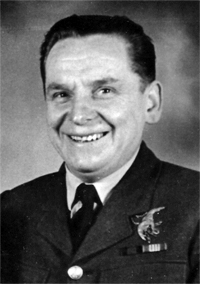 Jan Arymiuk was born on 24th June 1915 in Branica Suchowolska (parents Józef and Karolina). In 1933, he attended the Non-Commissioned Officer School for Youth in Bydgoszcz, and, in 1936, graduated as a wireless operator. He was transferred to the 1st Air Regiment in Warsaw where, during the following year, he completed his training as wireless operator and air gunner. He was then transferred to the 213th Bomber Squadron, 1st Air Regiment in Warsaw which, in 1938, was renamed to the Bomber Training Squadron. Until the outbreak of the War, it used PZL.23 "Carp", as well as PZL.37 "Moose", planes. In accordance with a mobilisation plan, shortly before the war Artymiuk was transferred to the so-called 21st Radio-Navigation Platoon of the Bomber Brigade. In September 1939 he did not take part , but was evacuated with his unit to the east. On 17th September, he crossed the border of Romania in Kuty.

Artymiuk got through the sea route, via Beirut, to Marseille. He reached the non-commissioned officers' camp for airmen in Istres, where he remained for over a month and a half - he applied to leave for England and on 24th December 1939, he sailed in one of the first groups Great Britain. Initially, he was staying at RAF Eastchurch base, after which he was ordered to Bramcote where, in the summer of 1940, the bomber squadrons, 300 "Mazowiecki Land" and 301 "Pomorski Land", were formed. Artymiuk found himself amongst the initial personnel of this first unit. The squadron trained in light-aircraft bombers with three-man crews, and to Artymiuk fell the position gunner/wireless operator. In August and September 1940, he took part in the fighting against an invasion fleet in the ports of Ostend and Boulogne. After these defensive battles, in November 1940, the 300 Squadron, flying Wellingtons, Artymiuk flew with a crew comprising: pilot P/O Józef Kuflik, pilot P/O Jan Janicki, navigator P/O Nikodem Koziński and gunners Sgt Marian Sztul and Sgt Aleksander Suczyński.

On the night 23rd-24th March 1941, as a member of one of four crews, Artymiuk flew on the historical bombing of Berlin by Poles. During the course of the following months, targets were bombed France, Holland and Germany. On the night of 10th-11th July 1941, the first of 29 missions began with the task bombarding Cologne. During the course of returning, they were shot down in Turnhout region of Belgium. The whole successfully escaped by parachute but was taken prisoner. Artymiuk remained a prisoner until the end of the War, among others, in Stalag Luft 1 in Barth on the Pomerania as well as Slag Luft 3 in Żagań, after which he returned to England. There is a lack of information about his postings in the years 1945-1946.

Jan Artymiuk completed his service in the Polish Air Force with the rank of Warrant Officer. He was decorated with Silver Cross Virtuti Militari (no. 9053), and Cross of Valour with three bars. He went to the Polish Resettlement Corps, remaining at the airbase at Dunholme Lodge. In August 1948, he finally became a civilian and emigrated to Australia, reaching Sydney on board the ship "Strathnaver". In the beginning, he reached a immigrant transit camp in New South Wales. Initially, he worked as a labourer in a sawmill in Goroke in western Victoria, later at Rocklands Dam as well as the Kiewa Hydroelectric Scheme. He qualified as an electrician and worked in a power station in eastern Victoria. His last position was that of a senior electrician in a brickworks in Melbourne.

Jan Artymiuk was communally active in Polish organisations in Australia. He was involved the Polish Airmen's Association in Victoria (serving as Vice-President as well as Treasurer) and the Polish Association. For this work, he was awarded the Gold Cross of Merit. He died on 27th January 1986 at the age of 70. He was buried in the Springvale Botanical Cemetery in Melbourne. Participants at the funeral were asked, instead of wreaths, to make donations towards the building of the Polish Community Centre (over $3,000 was collected, which was a large amount at that time).