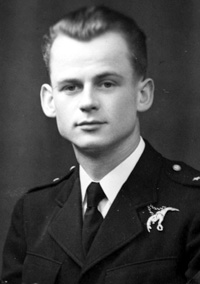 Marceli Neyder was born on September 3rd, 1918, to a Polish emigré family in Essen, Germany. His father was a hard-working miner, supporting a family of several children. In 1922 the Neyders returned to Poland, settling in Bydgoszcz. In 1925 Marceli began his education. His first year was spent at the school in Osowa Góra; afterwards he attended Czyżówek school. After gaining his higher school-leaving certificate in 1937 he attended the joint cadet college; on passing out he joined the Polish Air Force Academy in Dęblin on 2nd January 1938. He did not participate in the military defence of Poland, as on 8th September he was evacuated with a group of air cadets to the Romanian border area. On September 19th he crossed the border and made his way by train via Bucarest, Jugoslavia and Italy, to reach the rallying point near Paris (arriving by 10th October!) In December 1939 he was transferred to Bron, Lyon. In May 1940 he began training on the MS-406 at Tours airfield, but the capitulation of France forced him to evacuate by sea to Britain.

Neyder disembarked at Liverpool on 27th June 1940. On October 4th he was sent to the 5th OTU at Aston Down for re-training on British aircraft and on 25th October he was posted to the 303 "Tadeusz Kościuszko" Squadron as a non-operational pilot to train on Hurricane fighters. On 2nd December 1940 he was posted to 302 "Poznań" Squadron. On 13th March 1941, flying with the section of P/O Wacław Król and P/O Bronisław Bernaś, he attacked a lone Ju 88 over Selsey Bill. Each of the pilots was credited with 1/3 damage inflicted, though it was later confirmed that the Junkers had crashed into the English Channel. He inflicted a further hit, this time purely on his own account, on 10th May 1941 during an evening patrol over Ashford (Bf 109).

On 28th June 1941, at his own request, Neyder was transferred to 307 "Lvov Eagle Owls" Night Fighter Squadron, defending the Exeter area against German bombing raids. Here he re-trained on two-seater Beaufighters and, accompanied by navigator Sgt. Jan Woźny, began to fly night patrols. On the night of 25th/26th November 1941 Neyder was directed to Church Stanton, where he engaged briefly with a Ju 88, on which he inflicted damage. On 25th/26th April 1942, after a prolonged pursuit, they shot down a Junkers (confirmed) and on the following night they inflicted damage on a further Ju 88. On the night of 3rd/4th May 1942, during a massive raid on Exeter, Neyder and Woźny destroyed another Ju 88, which crashed in flames into the sea.

In August 1942, Neyder applied to be transferred to RAF 23 Night Fighter Squadron (then stationed at Manston). With this British squadron Neyder re-trained on the modern Mosquito Mark II fighters (it had been his wish to fly the "Wooden Wonder" that prompted him to apply for the transfer). Neyder crewed up with British navigator F/O Sydney John Cornes. In December 1942, 23 Squadron was posted to the Mediterranean theatre, to Luqa air base, Malta. The aircraft were flown there on 27th December 1942. The 23 Squadron aircrew, including Neyder and Cornes, specialised in long-range "ranger" and "intruder" missions over Sicily, Italy, Tunisia and even southern France.

On 21st February 1943, at 3.35 a.m., Neyder and Cornes took off for a mission in the Maratimo-Pantellaria region. Following the take-off there was no further radio communication and when the crew failed to return it was acknowledged that they had perished. They probably crashed into the sea. Flight Lieutenant Marceli Neyder was awarded the Silver Cross Virtuti Militari (no. 8376) and the Cross of Valour and two bars.