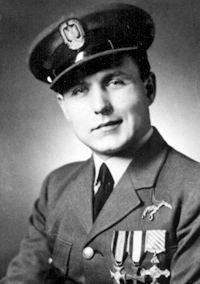 Edward Hajdukiewicz was born in Białystok on June 14, 1913. His parents were Władysław - a businessman - and Helena Kranc. He completed primary school and on January 15th, 1935, he entered the Army with the goal of completing basic service. He was assigned to the 80th Infantry Regiment in Słonim (now in Belarus), where he served successively in the 2nd machine gun company, 3rd machine gun training company and again in the 2nd company as deputy team leader. In 1936, he enlisted for service in the Air Force, and from August 14th to September 14th 1936, he completed a glider course in Ustianowa (in the Bieszczady mountains in southeast Poland). After this, he was assigned to the 4th Air Force Regiment in Toruń, where, on August 10th 1937, he completed a flying training course on single engine aircraft and ground personel training course. On August 12th, he was assigned to Grudziądz for fighter pilot training. However, he did not complete the full program. On September 1st, 1937, he was posted to the 4th Regiment. He was assigned as a pilot of PZL.23 Karaś aircraft in the 42nd Combat Flight, where he remained until the Second World War, serving first in extended military service and then as a regular soldier in the rank of Leading Aircraftman (kapral). While he was in the Armed Forces, he decided to complete his schooling and entered the 6th class of the Nicholas Copernicus Public High School in Toruń as a extramural student. He graduated from this institution towards the end of January, 1939.

Upon mobilization, his squadron was transformed into the 42nd Reconnaissance Flight and merged with the Air Force of of the "Pomorze" Army. On the 24th of August 1939, this flight was divided into two parts, of which one part remained in Toruń (flying personnel and airplanes) and the other part (surplus pilots, observers and gunners) was transferred to Łatkowo airfield. During the succesive days of the defensive war, the unit moved ever farther to the East, successively to the airfields of Zduny, Falbórz, Butlerów and Franopol. In the sphere of combat activities, Hajdukiewicz completed three missions with the 42nd Flight. On September 1st - crew: observer F/O (porucznik) Mieczysław Daab and air gunner LAC (kapral) Tadeusz Aranowski - he followed armoured units in the area of Sępólno and strafed a column of infantry in cars. On September 5th - crew: F/O (porucznik) Daab and air gunner LAC (kapral) Antoni Jasiński - he bombed German concentrations in Nowy Dwór. On September 6th (again with Daab and Aranowski) he flew reconnaissance flights over the Grudziądz area and bombed a motorized column. On September 11th, he was transferred, along with two other pilots and four Karaś aircraft to the 64th Bomber Flight of VI Light Bomber Squadron at Franopol airfield. While with this unit, he completed two combat missions, one of which was on September 14th when he - together with observer P/O (podporucznik) Roman Galewicz and air gunner LAC (kapral) Stanisław Kamiński - bombed tanks and cars in the area of Rawa Ruska and Sokal. On the afternoon of September 14th, after bombing squadron planes at Hutniki airport, the personnel withdrew towards the Romanian border, by way of a circular route. They crossed the Romanian border at Kuty on the morning of September 18th, the day after the Soviet Army crossed into Poland.

Hajdukiewicz succeeded in leaving Romania. Travelling across the Black Sea and the Mediterranean, on the vessel "Aghios Nikolaos" from Balchik to Beirut, and on the "Ville de Strasbourg" from Beirut to Marseille, he arrived in France on October 29th 1939. At first, he was directed to one of the gathering centers for Polish pilots (probably a barracks for non-commissioned officers in Istres), and then to Air Force Training Centre in Lyon-Bron. He applied to go with the Polish contingent for training with the Royal Air Force in England, and, was stationed at the RAF Eastchurch from January 9, 1940. During the following months, he learned English and undertook basic theoretical courses. On May 31, 1940, he was transferred to Blackpool with the entire Polish group, where he remained until June 10th. Next, he was assigned to the RAF Carlisle, where the objective was to be trained on British equipment. He continued these studies at Hucknall from September 1st to 23rd.

On September 23rd, 1940, after flying the requisite number of hours, Hajdukiewicz was assigned to the 300 Polish Bomber Squadron at RAF Hemswell. At that time, this squadron flew single-engine Fairey Battle aircraft and was engaged in harassing the German invasion fleet in continental ports. Hajdukiewicz managed to perform one such mission, a night attack on Calais on October 10th-11th . His crew consisted of radio operator P/O Czesław Dej and air gunner Sgt Henryk Węgrzyn. After the rearmament of 300 Bomber Squadron with twin-engine Wellingtons in November of 1940, the crew was increased to six. The scope of the mission changed as well. From then on, the bomber targets were far from England and included, among other targets, German cities. At first, Hajdukiewicz served as second pilot, but from March 1941, served as first pilot. He did not have a regular crew, but flew most often with pilot F/Lt Władysław Cichowski, navigator F/O Władysław Rogalski, radio operator Sgt Wiktor Jabłoński and air gunners P/O Edmund Jura and Sgt Tadeusz Świdziński. He successively bombed Rotterdam, Cologne, Brest, Hamburg, Berlin, Brest, Kiel, Brest, Berlin, Kiel, Hamburg, Mannheim, Cologne and Osnabrück. On the attack on Berlin on the night of March 23-24, 1941, he was the commander of one of the first four Polish crews which dropped bombs on the German capital. On the deck of his plane with him were: pilot Sgt Piotr Nowakowski, navigator F/O Władysław Rogalski, radio operator Sgt Wiktor Jabłoński and gunners F/O Edmund Jura and Sgt Tadeusz Świdziński. His second raid on Berlin, on the night of April 17-18, ended with damage to his Wellington aircraft from anti aircraft fire. Because of this, the hydraulic system failed and the crew had to lower the undercarriage by hand. Moreover, the navigator sustained light injuries.

On June 2nd, 1940, after completing his tour of duty, which consisted of 15 combat missions, Hajdukiewicz was sent on a Blind Approach Training course at RAF Mildenhall. On June 22nd, 1941, upon completion of this course, he was detached to 18 Operational Training Unit at Bramcote as a instructor of crew trainees on Wellington aircraft. While serving in this capacity he still flew twice on combat missions. On September 11, 1942 he obtained a posting to the 305 Polish Bomber Squadron, and next, on September 22nd to the 301 Polish Bomber Squadron. However, as a member of these groups, he did not participate in combat missions. On October 2, 1942, he was transferred to the Motorized Cavalry Cadet Officers' School in Auchtermuchty in Scotland, where he remained until December 18th. As a result of completing this course, on January 1st, 1943, he was promoted to the Polish rank of Pilot Officer (podporucznik).

Shortly afterwards, Hajdukiewicz applied to take part in a second tour of combat missions and as a result of this request, on January 21, 1943, he was assigned to his old unit, the 300 Polish Bomber Squadron. Once again, he flew Wellingtons as first pilot. As before, he did not have a regular crew (at this time, there were crews of five) and each time his comrades in arms changed. He successfully completed his second tour of duty within seven months. He successively flew to: mine the waters near Lorient, bomb Cologne, Wilhelmshaven, Essen (twice), Duisburg, Bochum, Kiel, Stuttgart, Mannheim, twice more on mining missions, to bomb Duisburg, Bochum, Essen, more mining, over Düsseldorf and Aachen - altogether he carried out 19 combat missions, which counted as a second tour of combat. On August 24, 1943, he was transferred to the Polish Depot at Blackpool, where he had a four month rest. Then, due to his long experience in flying twin engine planes, he received a posting to the 45th Transport Group which was based in Dorval, Canada. There were many Poles who served in this group (over 100 throughout the war). Their mission lay in delivering planes produced overseas in North America to either Europe or Africa. Hajdukiewicz remained in the 45th Transport Group until the end of 1946, flying to Europe across the northern route: Canada-Greenland-Iceland-Scotland (Prestwick).

Edward Hajdukiewicz completed his service in the Polish Air Force with the Polish rank of Flying Officer (porucznik) and the British rank of Flight Lieutenant. He was decorated with the Silver Cross of Virtuti Militari (no. 9060), Cross of Valour and three bars and the British Distinguished Flying Cross, as well as commemorative medals. After the war, he decided to settle in Canada, residing in Montreal. He was the joint owner of the real estate firm "Hajdukiewicz-Edwards". In December of 1953, he and several Polish pilots became co-founders of 310 Wilno Wing (under the umbrella of the RCAF Association), connecting Polish Air Force veterans of the Second World War. In the 1950's and again after 1984, he served as the president of this organization.

Squadron Leader (major) Edward Hajdukiewicz died on October 28, 1998 at the age of 85. He is buried in the veterans' cemetery Field of Honour in Pointe Claire, Canada.