The Squadron was ordered to give close escort over on the port side to 36 Marauders, with No. 611 Squadron providing escort on starboard side, the two squadrons flying as a Wing under W/Cdr. Lucas. No. 308 Squadron, led by S/Ldr. Zulikowski, took off from West Hampnett at 10.24 and made rendezvous with the Bombers at 13,000 feet, at approximately 10.35, West of Beachy Head. After leaving the English coast, three Bombers turned back; before crossing the French Coast at 11,000 feet near Fecamp, Long Range Tanks were jettisoned. The formation proceeded to the target, Bernay Aerodrome, without incident, except that Operations warned of Bandits - twelve to the S.E. and fifteen to the N.W.

In the target area, while the Bombers were releasing their bombs, the Squadron did a slight turn to the right, and then turned left, intending to complete 180° and come out. Just on the turn, still at about 11,000 feet, the Squadron was jumped from the blinding sun by F.W.190's. Estimates of the number vary considerably, but about 20 seems the most likely figure. Dog-fights broke out everywhere, and all pilots report that the Squadron was out-numbered. Several pilots remarked that the enemy seemed ready to give battle, provided there was no danger from behind. All pilots found they could easily out-turn the F.W.190 but as soon as they got near the tail of a Hun, combat was broken off.

It is difficult to get a connected story, but it seems that F/O. Mejer, whilst on the tail of an enemy, was himself caught from behind, and it is probable that it was he who was seen to bale out - believed successfully. F/O. Ilinsi was last seen diving on a F.W.190 and nothing is known of F/Sgt. Sznapka. Three crashed aircraft were seen on the ground in the vicinity of the combat area. The remaining pilots mostly found themselves alone, and made their way back to base individually; the personal statements of S/Ldr. Zulikowski and F/Sgt. Stanski are quoted below in this report. F/Sgt. Korwel is in hospital but it is believed he has no claim. It seems he was attacked by F.W. 190's after he had expended his ammunition, and got badly shot up. A cannon shell exploded in his cockpit, severing three fingers and wounding his legs, but despite that he flew back, and made a belly landing in a field near Brighton.

Some of the F.W.190's had black stripes painted on the under surfaces of the wings, resempling very closely the Typhon camouflage.

"I was flying No. 2 to S/Ldr. Zulikowski. Just about over the target, whilst the Marauders were bombing, the formation did a slight turn to the right and then started turning 180° to the left. On the turn, with the sun on our right, enemy aircraft came out of the sun. S/Ldr. warned Bandits over the R/T, increased his rate of turn, put down his nose, and I followed. I observed a F.W.190 trying to get on his tail, turned slightly right to give the Bandit a short burst, but apparently he saw me and broke off. I continued following the S/Ldr. down but lost him, and observed a Spitfire with smoke pouring from the engine, and nearby a parachute opening. Dog-fights were breaking out everywhere, with several aircraft milling around, and I joined the circle. I noticed one F,W.190 trying to get on my tail, but after about three turns I was able to get on his tail; just as I was closing to open fire, he broke off, and owing to the risk of being jumped myself, I left him. Continuing to circle I saw another F.W.190 doing a right-hand turn about 500 feet below me. I got on jis tail, diving slightly, and at 400 yards gave him a long burst. I saw golden strikes on the front of his cockpit. He broke off, and I claim one F.W.190 damaged, subject of stepping up resulting from the Combat film. I was unable to see what happend to the Hun.

"After that, I started left-hand turns again, dived on a F.W.190 below me, opening fire at long range without result. By then, I had lost height to 2,500 feet, and came down to ground level and set course for home. I decided to regain height, and climbing to 5,000 feet, met F/O. Hajduczek, South of the Seine. Looking behind, I saw a F.W.190 following us at about 1,000 yards range. I warned Mr. Hajduczek, we weaved together, and I believe Bandit opened fire but no damage was suffered.

"We returned to the base as a Section." 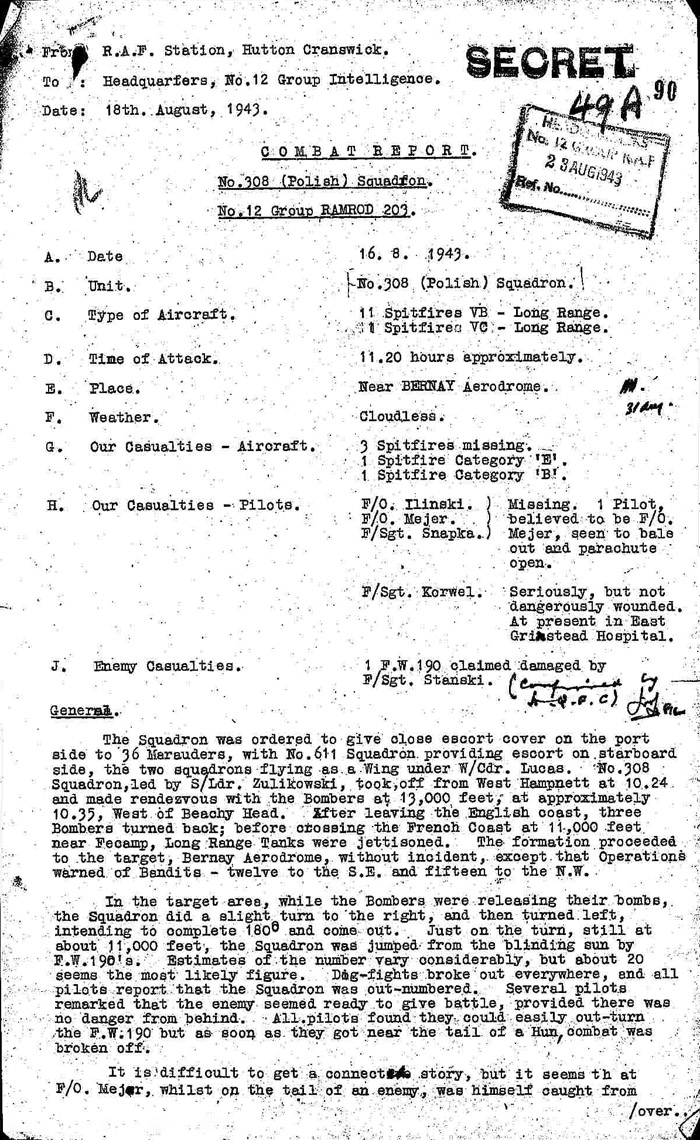 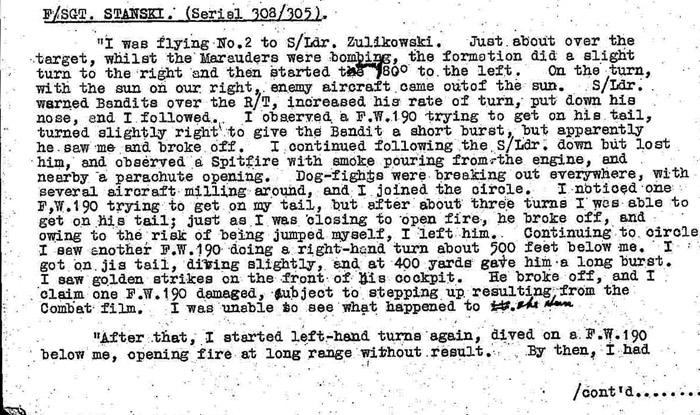