I was leading the Sqdn. We had passed over the French territory and were leaving the French Coast behind us in the vicinity of Cap Grus Nez, when I saw 6 Me.109F below - my section immediately attacked then and I picked out an Me.109F. giving it 2 short bursts from 150 yds. closing to 50 yds. The E/A started to smoke and went into a steep dive. I went after it and gave another short burst from 100 yds. flames appeared so I ceased firing. The pilot did not bale out and I saw the a/c plunge into the sea. Having become separated from my section, I gained height, making for England and flying just below clouds at 10,000 ft. when I saw another Me.109F emerging from the clouds, making turins in an undecided manner. I came up to him from below unobserved and from 70 yds. gave him a burst, the Me. made a very shaky turn to the right and at the same time seemed to almost stand on it's tail as though the pilot had been hit and lost control, and I got to within 30 yds. and gave another burst. Huge columnes of black smoke appeared and fragments of the fuselage flew in all directions, the Me. flopped over to one side and started slipping downd sideways quite out off control, with pieces falling off. Though I was certain that the pilot was killed, I decided that as no flames were visible I would make sure that the Me. would be destroyed, so I followed him down intending to give him another burst when to my chagrin I found I could not fire any more (I thought my ammunition was exhausted, but it was in reality failure of air pressure) nevertheless I kept close to him from 10,000 ft. to 1500 ft. when he was still slipping down towards the sea, enveloped in clouds of back smoke and could not - even if the pilot was not dead - hope to recover. I then noticed bullet traces converging on me and saw 2 Me.'s on my tail. Being convinced that my victin was destroyed, I made a steep turn, causing my attackers to overshoot me, and slinked into the clouds. I claim 2 Me.109F destroyed. 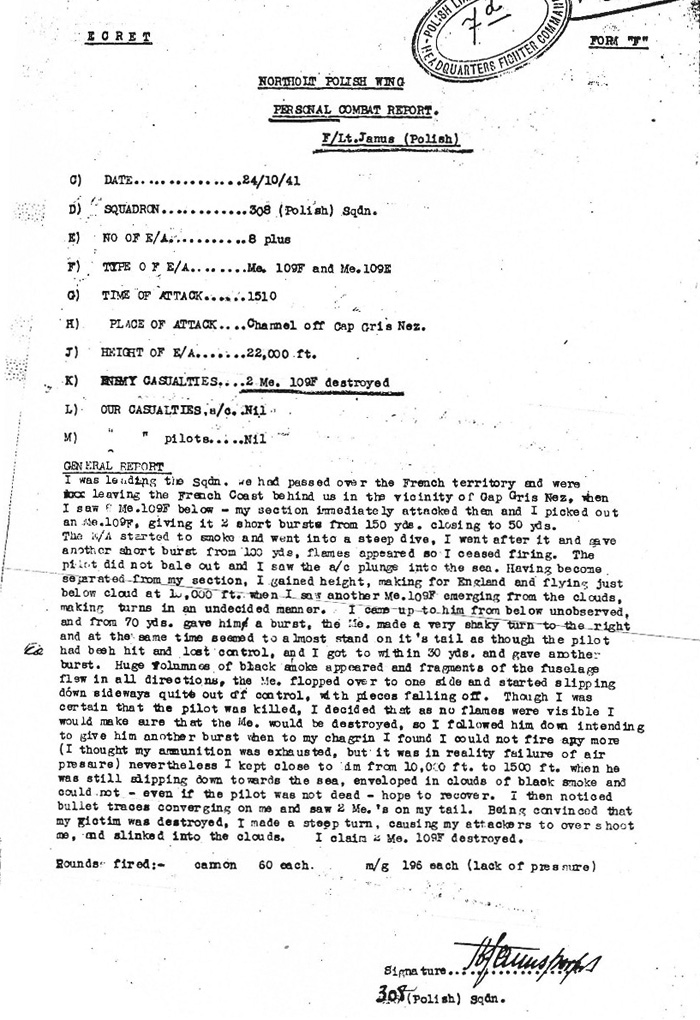