K. Personal narrative to include all details of tactical value.

I was leading Blue Section of 3 Mustangs escorting Lancasters. Soon after the Bombers left the Target I heard the Bomber leader calling on R/T "Som Jet jobs attacking us", and also at the same time Bombers were firing Green very lights. Immediately I broke away and took my Section close to Bombers, which were already attacked by two E/A without results. I could not attack the first two as they were too fast, and went right through the Bomber stream; two minutes later there were two more ME 262s approximately 1,000 yards apart. They attacked the middle of the Bombers leading formation, and one of the Bombers was shot down. At that time I was on the left side of the Bombers at 18,000 feet. Those two ME 262s after shooting down 1 Lancaster turned 90 degrees to port in a gentle dive. Therefore I was in a suitable position to catch the first one. I opened fire from 450 yards 45 degrees. I gave three bursts and saw strikes on the cockpit, and black smoke coming from the plane. He slowed down, I pulled up and saw that E/A spinning down and part of his tail was falling off. Sgt. Kulecki, my No. 2 saw the ME 262 which I attacked spinning and his wings falling off. Sgt. Bobrowski from 306 Squadron saw the same ME 262 first spinning then emitting black smoe and blow to pieces. I claim 1 ME 262 destroyed. 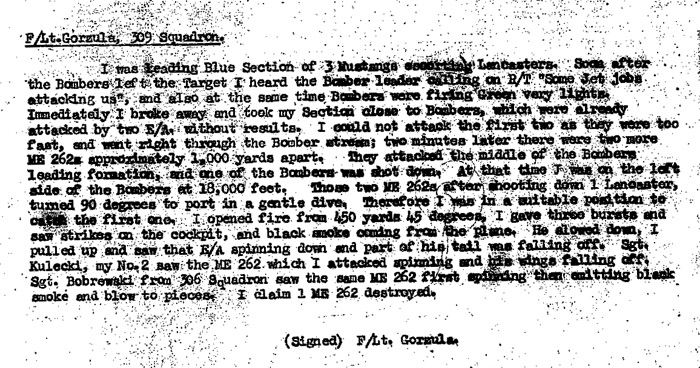 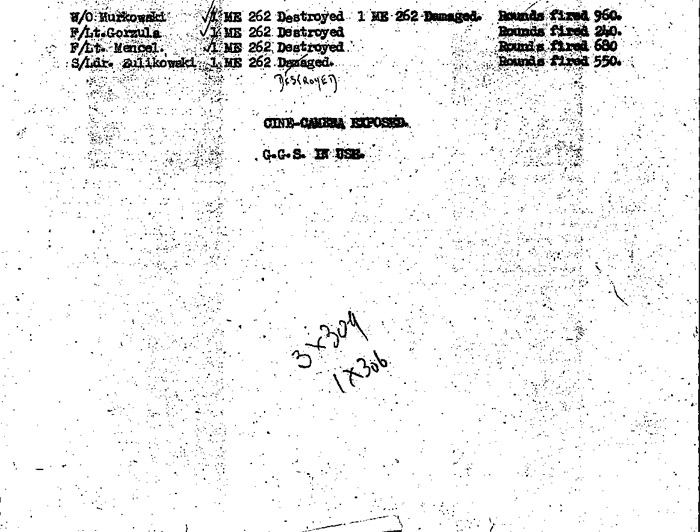